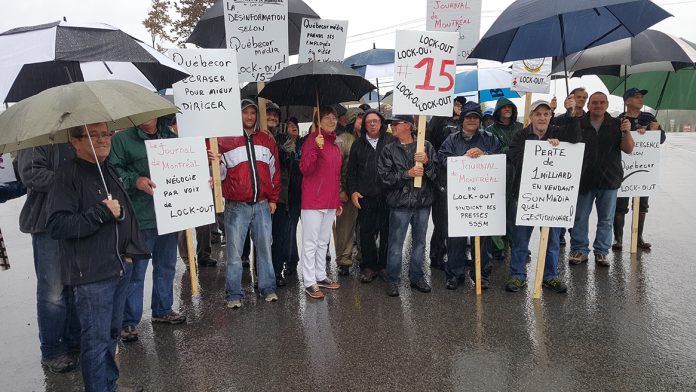 Laval, September 16th, 2015 — In the first bit of good news to come out of a seemingly endless lockout, an arbitration tribunal ordered yesterday the Journal de Montréal and Québecor Média’s Mirabel printing plant to reinstate 13 workers with all their rights and privileges within 7 days of the decision. The workers will also get back all the wages and benefits they lost since the beginning of the year, adding up to hundreds of thousands of dollars.

The printing plant laid-off the workers in January on the pretext of lower printing volumes and in so doing violated its legal obligations to these workers.

The members of Local 555M of the Canadian Teamsters Union who work at the Mirabel plant have a job security clause in their collective agreement on which Arbitrator Suzanne Moro based her decision.

“Our members received the good news this morning [yesterday],” said Local 555M representative Denis Fournier. “We believe that in the next few weeks, a similar decision will be rendered for the other laid-off workers.”

Mr. Fournier was referring to the 30 other Teamsters members who were recently laid-off by the plant and who are awaiting an arbitration decision that is bound to be the same.

“In order for there to be trust and a sense of belonging, workers need to feel respected by their employer,” explains Denis Fournier. “These lay-offs and the lockout only end up making things worse between the parties.”

“Our goal in these negotiations was not just to ensure the well-being of the workers but the future of the plant as well.”