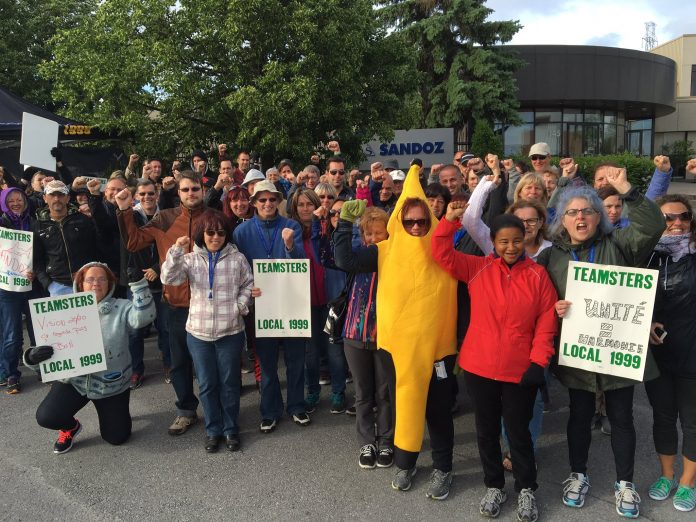 UPDATE 2016/06/11 : Victory at Sandoz! After a strike and a lockout, workers voted 97% in favour of ratifying a new agreement. Back to work Sunday night. Congratulations to the members and the negotiating committee!

UPDATE 2016/06/10 : A tentative agreement has just been reached with Sandoz. It will be presented to members for a ratification vote this weekend.

Boucherville, June 8 2016 – The 24-hour strike at the Sandoz pharmaceutical factory is now a lockout.

The employer turned away workers who showed up this morning for their 7am shift.

This irresponsible tactic could eventually disrupt the supply of medications to hospitals.

“A 24-hour strike is one thing, an indefinite lockout is another,” said Jean-François Pelletier, a Business Agent with Teamsters Canada Local Union 1999. “We went on strike for only 24 hours precisely to avoid creating a drug shortage.”

The Teamsters Union is meeting with management this afternoon in the hopes of resolving the labour dispute.

Inaugurated under the corporate name Sabex in 1980, the Sandoz plant manufactures injectable medicines such as morphine and infuvite for use in ambulances and operating rooms.

The Teamsters represent 120,000 members in Canada in all trades. The International Brotherhood of Teamsters, with which Teamsters Canada is affiliated, has 1.4 million members in North America.

Who: Stéphane Lacroix, Director of Public Relations & Teamster Spokesman
Where: 145, rue Jules-Léger, Boucherville QC J4B 7K8
When: From June 8th at 8:15 am
Contact: See below