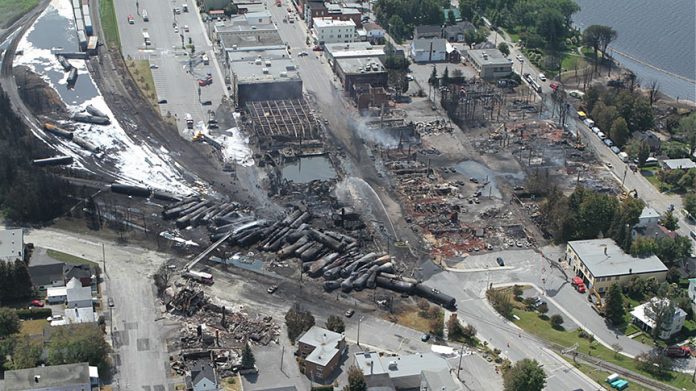 The massive layoff of maintenance of way crews by Canadian Pacific (CP) does not bode well for the Canadian railway system in the event of a major disaster. In light of this fact, Transport Canada must intervene immediately and apply the Railway Safety Management System Regulations, 2015.

CP refuses to undertake a risk assessment even though it has the obligation to do so pursuant to the Regulations and despite the layoffs or the abolition of 500 or so maintenance-of-way employee positions.

On the eve of the commemoration of the Lac-Mégantic disaster, the Teamsters Union summons Transport Canada to take prompt action before it is too late.

“CP is in clear violation of the law, and Transport Canada has all the tools it needs to order the reinstatement of these workers,” says Gary Doherty, president of the Teamsters Canada Rail Conference—Maintenance of Way Employees Division. “Not only is CP abolishing these key positions, but it is also increasing the speed at which its trains will cross certain cities!”

Indeed, the union recently learned that the rail carrier would be increasing within 60 days from 50 to 60 miles per hour the speed at which its trains will pass through the town of Beaconsfield.

The mayor of this western suburb of Montréal, Georges Bourelle, denounced the fact that CP did not even bother consulting him or undertaking a risk assessment. The mayor is concerned about the safety of his fellow citizens, some of whom live within a few metres of the railway.

For Doug Finnson, president of the Teamsters Canada Rail Conference, which represents the running trade employees of CP, CN and VIA Rail (locomotive engineers and conductors for example), CP’s announcement conjures up very bad memories.

“We believe reducing maintenance budgets that results in a reduction of qualified maintenance personnel compromises the safety of railway operations and the general public,” he explained. “Let’s not wait for another disaster such as the McBride [British Columbia] bridge derailment to occur before legally requiring railway companies to maintain their tracks in accordance with very rigorous standards.”

“Fines and slaps on the wrists after the fact do not repair the shattered bodies and lives of those workers.”

A locomotive engineer and a conductor both died in the derailment.

In 2003, the Transportation Safety Board report commented that “the maintenance work on the bridge was not given a high priority”, and that “deficiencies associated with the inspection and maintenance of timber bridges were identified during the TSB investigation.” Within the TSB Report conclusions it was stated: “The failure to identify the urgency and the severity of the condition of the bridge was not recognized, despite subsequent inspections, because of shortcomings in the inspection, assessment, planning, and maintenance process.” and that “because there was no Transport Canada audit of work procedures, there was no opportunity to identify the deficiencies associated with such bridge inspection and maintenance procedures.”

“We sent a very clear letter to Minister Garneau two weeks ago,” concludes Gary Doherty. “I will therefore hold the federal government directly responsible for the next derailment involving inadequate maintenance of ways if he does not implement our recommendations.”

The Teamsters Union will be monitoring the situation closely and will systematically document all incidents connected in any way to track maintenance work. It also encourages members of the public to contact their elected officials if they witness worrying situations on railway tracks.