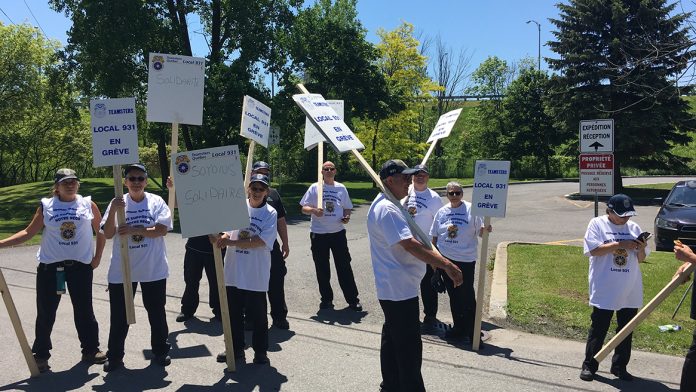 Laval, June 7, 2017 — Unacceptable offers by management and a breakdown in negotiations forced some 80 workers at Sleeman-Unibroue, a subsidiary of Sapporo, to go on strike this morning.

The workers are members of Teamsters Local Union 931.

A final offer from the company was presented at a union meeting on June 3 and was subsequently rejected by 93% of workers. The results of the vote sent a clear message to the plant’s management team.

Teamsters are currently setting up picket lines around the plant.

Seniority rights are at the heart of the labour dispute between the Teamsters and Sleeman-Unibroue. Repeated violations of the collective agreement and issues involving overtime are also sticking points.

Achieving a work/life balance at the brewery is impossible for some workers, who are often forced to work overtime on short notice. Company managers maintain that mandatory overtime is preferable to hiring new workers to fill positions left vacant due to retirements and job cuts.

The employer is also asking for provisions in the collective agreement that would allow experienced workers to be laid off and replaced by temp workers who don’t already work for the company.

“Our members feel disrespected and that’s why they walked off the job,” explained the President of Local Union 931, Gerry Boutin. “We also want to make it clear that salaries and pensions are not an issue.”

Training is another problem. Workers have a difficult time acquiring the skills needed to operate some of the equipment, leading to health and safety concerns.

Moreover, a hostile work environment has led to over 200 grievances being filed in past months on a variety of collective agreement violations. Acrimonious labour relations unsurprisingly led to problems at the bargaining table.

On top of everything else, the company decided to install surveillance cameras throughout the brewery, violating workers’ privacy.

“Intransigent and inflexible corporate executives caused this labour dispute,” explained Boutin. “Instead of working with workers and seriously trying to resolve problems at the brewery, the company decided to go to war with their employees in what I can only describe as a lose-lose strategy.”

“Management is solely responsible for this tremendous failure.”

Background on the negotiations

Negotiations started on November 7, 2016, one month prior to the expiration of the collective agreement. After just one meeting with the employer, the Teamsters were forced to seek help from a mediator given the company’s complete disinterest in tackling the issues that were harming labour relations at the brewery.

All in all, both parties negotiated for 10 days, 9 of which were spent in the presence of a mediator, for an actual total of 8 hours of face-to-face talks.

A strike vote was held on May 13 and, in an impressive show of solidarity and unity, 90% of voting members were in favour of strike action.

Teamsters represent 125,000 members in Canada in all industries, including thousands of workers in the brewery industry. The International Brotherhood of Teamsters, with which Teamsters Canada is affiliated, has 1.4 million members in North America.