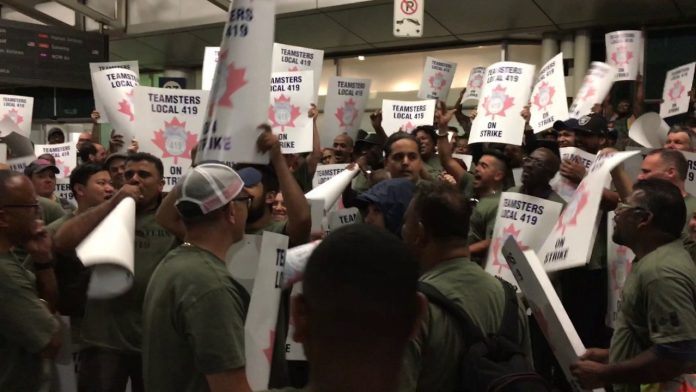 The workers are members of Teamsters Local Union 419. Their responsibilities include handling baggage and cargo, towing planes, cleaning cabins, and performing flight operations tasks for over 30 airlines.

“Swissport’s new offer was almost identical to what our members rejected in the first place,” explained Harjinder Badial, Vice-President of Local Union 419. “Management is proposing the same thing over and over again and expecting different results.”

The company is still attempting to impose a 3-year wage freeze on the majority of its workers, cut benefits, and gain the right to change schedules on short notice.

“Swissport workers don’t feel respected when they go to work every day. The fact that the company is still refusing to address the issues that led to a strike is a slap in the face for our members and travellers at Pearson,” continued Badial.

Swissport knew their demands were extreme and would likely provoke a labour dispute. It’s why the company started using temporary & poorly trained agency workers at Pearson Aiprort as early as April. The temps would be allowed to work in the event of a strike, even if the collective agreement was only set to expire in July.

Hundreds of these strikebreakers are now working at Pearson. Their inexperience and poor training has led to workplace injuries, accidents, damaged planes, delayed flights, and hundreds of cases of lost luggage at Canada’s busiest airport.

It is unclear how hundreds of agency workers were able to pass airport staff background checks so quickly, which normally take 3 to 6 months. They are regularly seen working in sensitive areas at Pearson without proper clearance.