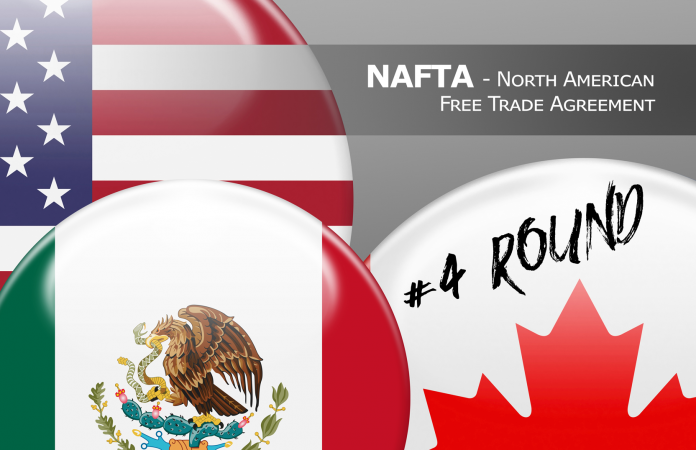 Washington DC, October 16, 2017 – At the fourth round of NAFTA renegotiation, the International Brotherhood of Teamsters dispatched staff from both its U.S. and Canadian trade policy teams to track and influence the negotiations on behalf of several top Teamster priorities, including highway safety, dairy supply management and worker rights.

As the talks wind down tomorrow, both General President Jim Hoffa and Teamsters Canada President François Laporte express support for U.S. and Canadian negotiators on these and other issues. In particular, the Teamsters applaud the decision by the U.S. Trade Representative to fix the NAFTA cross-border trucking provision.

“The Teamsters and our allies among independent truckers and highway safety advocates will be pleased with the U.S. position on cross-border services,” Hoffa explained. “The USTR approach is a creative solution to this long-standing controversy. Without getting into the details of the proposed text, I am satisfied that the U.S. position will permit Congress and the Dept. of Transportation to safeguard the livelihoods of American truck drivers and the personal safety of American families on U.S. highways under NAFTA 2.0.”

Laporte said, “Minister Freeland and Canadian negotiators have a progressive, pro-worker influence on these talks. We hope that the other parties will commit to a strong and enforceable labour chapter, grounded in the initial Canadian proposal, which would serve as a model for protecting workers’ rights in future trade agreements.”

“The United States launched a violent assault on Canada’s dairy supply management system. Tens of thousands of jobs will be in jeopardy unless the Trudeau Government continues its defense of dairy workers and farmers,” Laporte said. “Don’t be surprised if

Finally, the Teamsters express cautious optimism that the investor-state dispute settlement (ISDS) apparatus will be dramatically reformed under a new NAFTA in a way that protects our governments and sovereignty from corporate litigation in secretive tribunals.

“Under the Ambassador’s leadership, the USTR staff has proposed a bold revision to the substantive scope and jurisdiction of these controversial corporate courts,” Hoffa said. “The reported ‘opt-in’ provision is a good step to fulfilling the USTR’s promise to remake the investment chapter.”

The Teamsters, along with many other civil society critics of ISDS in both Canada and the United States will be hard-pressed to support a final agreement that doesn’t limit future ISDS cases to claims of direct expropriation.

“We note with approval the corporate consternation from the chambers of commerce over this important and overdue reform,” Hoffa added. “The vehemence of the opposition from the employer community is an indication of just how unused they are to not getting their full agenda into trade deals, and it’s about time!”

We Will Never Forget