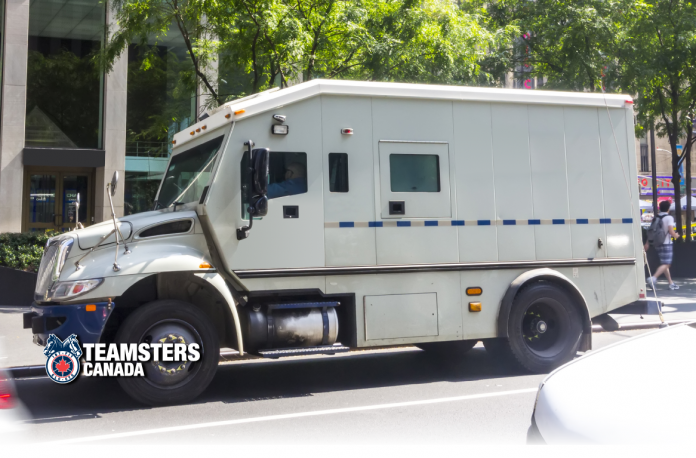 Toronto, October 26, 2017 – Approximately 80 armoured car guards at Inkas Security Group in Toronto could go on strike at 12:01 p.m. on Monday, October 30. Workers gave Teamsters Local Union 419 an 89% strike mandate last week. Safety is the biggest issue for the union, along with wages and working conditions. The company broke off negotiations on Monday.

“Our members think Inkas cares more about profits than workers’ safety,” explained Owen Lane, the Business Agent leading the negotiations. “Safety standards at Inkas are a nightmare and fixing them is Teamsters’ top priority.”

Other sticking points include wages, benefits and pensions. Wages at Inkas are the lowest in Ontario’s armoured car industry. Guards also receive a substandard 50/50 co-pay benefits package, which is difficult to use on such low wages, and no pension.

Teamsters represent over 2,000 armoured car guards in Canada, making it the largest union in the industry. For security reasons, Teamsters do not comment on the specifics of the safety problems facing armoured car guards. Criminals could use these details to plan attacks and robberies.

Workers at Inkas joined Teamsters Local Union 419 in June 2017. They’ve been attempting to negotiate their first collective agreement since July 5, 2017.

Inkas is the third-largest armoured car company is Ontario. The company services banks, ATMs, gas stations, jewelry stores, and other small businesses in the Greater Toronto Area. RBC and Ultramar are just two of the companies that could face disruptions in the event of a strike.

Negotiations will resume on Saturday, October 28 in a last-minute attempt to avert a strike. Teamsters remain committed to bargaining in fairness and good faith.