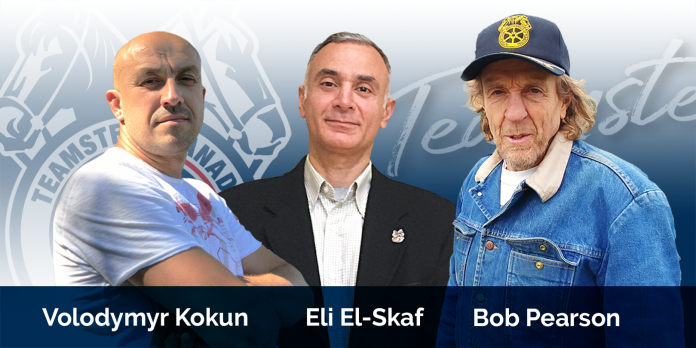 Our story takes place on a rainy December night in Vancouver. Eli El-Skaf, a member of Teamsters Local Union 155, was driving his shuttle bus on the Burrard St Bridge. He had just come from the set of the TV series where he worked. A pair of Teamsters from the same production, Bob Pearson and Volodymyr Kokun, were in a work truck not far behind him.

As an Audi A8 peeled off loudly and started speeding past Eli, the three Teamsters were completely unaware that they were about to become heroes.

The Audi lost control, crossed the centre line and collided head-on with an oncoming taxi before slamming into the side of the bridge. The crash destroyed the front half of the yellow cab. The A8 was scattered into pieces across the bridge.

Eli watched the scene unfold in front of him. While most people have only seen accidents like this in movies, Eli was a Lebanese army veteran who had witnessed worse.

Ignoring the risks and wasting no time, Eli got out of his bus and ran to the Audi as it burst into flames. The car and its driver were engulfed in the blaze; there was nothing Eli could do.

He quickly turned to the smouldering taxi. Eli assessed the situation. The fire in the taxi was creeping onto the dash next to the unconscious driver’s forehead. Eli could not remove the driver’s seatbelt but managed to drag the passenger, also unconscious, out from the taxi.

At that point, his fellow Teamsters had arrived in their work truck. Eli summoned Bob and Volodymyr to help drag the passenger away from the fiery accident scene.

The victims were taken to hospital and survived.

Knights of the Highway

As the rain turned to snow later that day, and police began piecing together what had happened, it became clear that the three Teamsters were heroes. First responders praised their actions.

Stories like these are rare. Most individuals would not run toward a burning car which could explode at any moment. The smells and heat are usually powerful enough to keep most people at a distance – never mind the risk of injury or death.

Sixty years ago, it was not uncommon to describe Teamster members as knights of the highway. Brothers El-Skaf, Pearson, and Kokun are three of those knights.