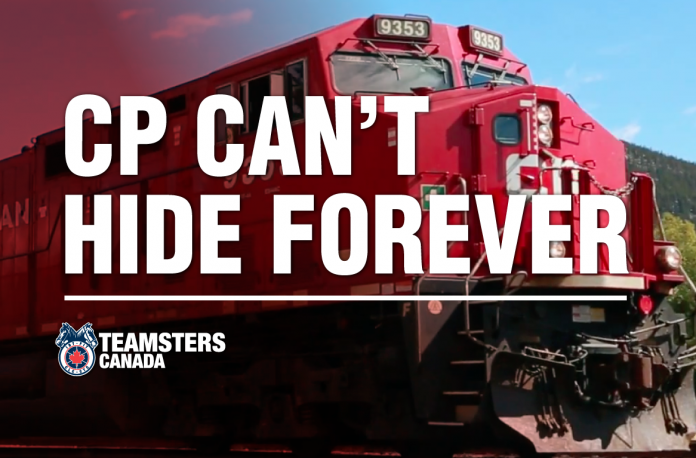 Calgary, April 20, 2018 – The Minister of Labour, on the advice of federal mediators, has agreed to Canadian Pacific’s request to order a vote on a final offer to renew their collective agreements with the Teamsters Canada Rail Conference (TCRC) and the IBEW System Council No. 11. Both unions strongly recommend that their members reject the company offers.

Because of this new development, the Teamsters and the IBEW will postpone a strike until their members have had chance to vote on the agreement. Once CP’s offer is rejected, both unions will be free to exercise their rights to strike.

“CP succeeded in delaying the inevitable. The government will bring this ridiculous offer to our members and we strongly recommend that members vote against it,” said the president of the TCRC, Doug Finnson. “I would like to reassure our members that we have given nothing up.”

“CP can’t hide from us forever,” continued the union leader. “Once our members reject their final offer, CP will have exhausted all possible escape routes and they will face their workers once again.”

The unions will not release specific details of the company offer until workers have had a chance to view them first. The offer does not satisfy workers’ concerns on fatigue and wages.

Cuts, punitive discipline and an adversarial labour relations strategy led to over 8000 grievances being filed against CP by Teamster members. Only 3000 workers are covered by their collective agreement.

Members of the IBEW have been in a similarly unprecedented situation for the past three years, with close to 300 grievances being filed. Only 360 workers are covered by their collective agreement.

“The fact that CP thinks their offer has a chance in hell of being ratified shows how out of touch they are with their employees,” said Steve Martin, Senior General Chairman from IBEW System Council No. 11. “The company is in for a wakeup call.”

The electronic vote on the company offers will be conducted by the Canada Industrial Relations Boards. It is not yet known when the vote will take place.

Some 3000 conductors and locomotive engineers, members of the TCRC, voted 94.2% to authorize strike action on April 6, 2018.

Some 360 signals and communications employees, members of the IBEW, voted 98.3% to authorize strike action on April 12, 2018.

The International Brotherhood of Electrical Workers (IBEW) represents close to 70,000 workers in Canada.