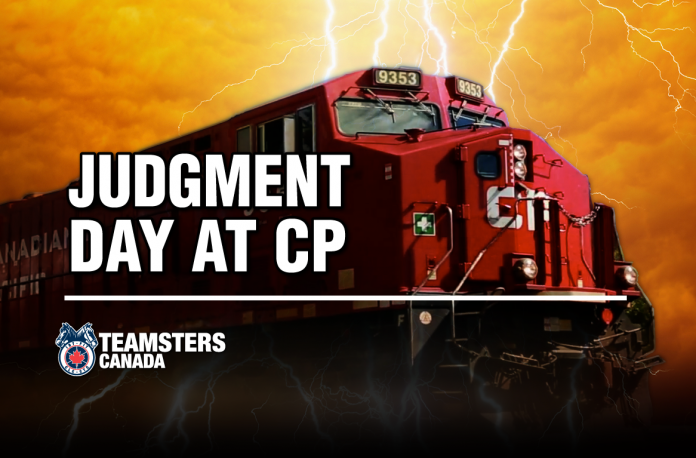 Laval, QC, May 1, 2018 – The Canada Industrial Relations Board will conduct the vote on Canadian Pacific’s (CP) final offer from May 18 to May 25, union officials today learned. The Teamsters Canada Rail Conference (TCRC) is urging their members to reject the company’s offer.

Out of good faith, the union will attempt to resume negotiations after CP’s final offer is rejected and before any possible strike action. Should talks fail or CP not wish to bargain, workers will exercise their right to strike after 72 hours’ advance notice.

“May 25 is Judgment Day at Canadian Pacific,” said the president of the TCRC, Doug Finnson. “CP has done everything it can to make a strike inevitable, but they can still avoid a work stoppage by bargaining in good faith.”

“Teamsters are ready negotiate with CP but we cannot bargain alone,” he added. “CP has to be ready to settle outstanding issues and to provide workers with a good and fair collective agreement.”

On April 20, the Minister of Labour, on the advice of federal mediators, agreed to CP’s request to order a vote on a final offer to Teamster members. This development postponed a strike that was set to begin on April 21 at 0:01 a.m. ET.

Workers will be mailed voting information over the coming days and will be able to cast their ballots via telephone and Internet. Results of the vote are expected to be known sometime on May 25.

“Fatigue is a critical issue with CP. You can’t safely work in the rail industry if you’ve been awake for too long,” explained Doug Finnson. “Another irritant is the fact that CP wants to pay workers less than at Canadian National, its biggest competitor.”

While just over 3000 workers are covered by the collective agreement, there are over 8000 outstanding grievances filed against CP. This is after the union won thousands of cases in 2017. Moreover, cases of dismissed workers rose by 500% at the Canadian Railway Office of Arbitration since CP adopted a discipline-based labour relations strategy.

“CP designed their final offer to entice workers to abandon their grievances, some of which are valued in the tens of thousands of dollars,” concluded the union leader. “CP is offering a fraction of what we think the company owes, and our members see through that nonsense.”

Over 3000 conductors and locomotive engineers at CP voted 94.2% to authorize strike action on April 6. Commuter train services would not be affected in the event of a strike by Teamster members.