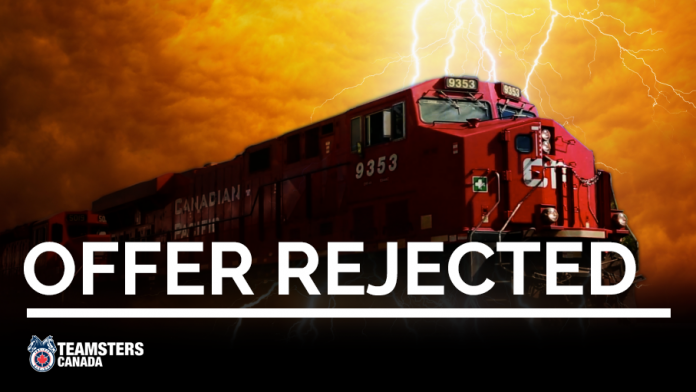 Laval, QC, May 25, 2018 – Members of the Teamsters Canada Rail Conference (TCRC) at Canadian Pacific (CP) voted 98.1% to reject the company’s final offer. Turnout for the electronic vote was approximately 77%

Negotiations with the company will resume immediately in an attempt to achieve an agreement and avoid a work stoppage. Teamsters are committed to working with federal mediators and reaching a negotiated settlement. Should talks fail or CP not wish to bargain, workers will have no choice but to exercise their legal right to strike.

The results of the vote come as no surprise to Doug Finnson, President of the TCRC.

“CP’s actions have forced us to vote for strike action three times in the past six years. Today, our members have again expressed their anger and frustration with CP,” said Finnson. “This is a reality check. It’s now up to CP to listen and show they respect workers by changing their confrontational relationship with their employees, our members.”

Conductors and locomotive engineers at CP voted 94.2% to authorize strike action on April 6.

On April 20, the Minister of Labour, on the advice of federal mediators, agreed to CP’s request to order a vote on a final offer to Teamster members. This development postponed a strike that was set to begin on April 21 at 0:01 ET.

The union will give 72 hours’ advance notice before taking strike action. Teamster members who operate commuter train services in Vancouver, Toronto and Montréal will not be on strike.