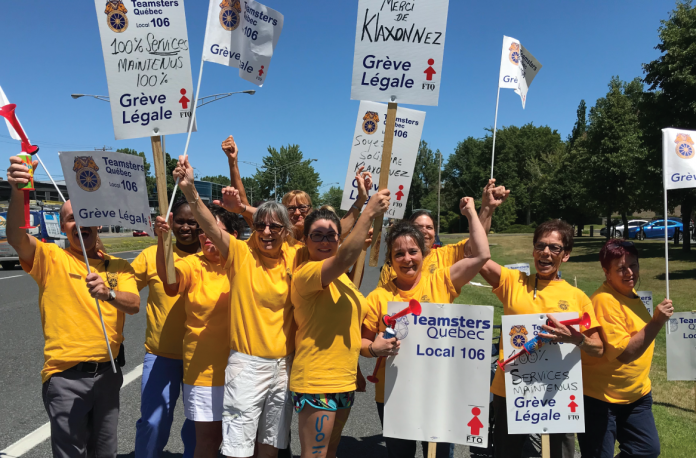 Laval, August 7, 2018 — Labour disputes have been resolved at the five Résidences Soleil where workers had been on strike since July 17. Meetings with a conciliator in the last weeks helped remove roadblocks to bargaining at the seniors’ residences in Saint-Hilaire, Granby, Laval, Pointe-aux-Trembles and Saint-Laurent.

Once again, some 300 members of Teamsters Local Union 106 led the way in obtaining some of the best working conditions in the industry. Their courage was rewarded as they blazed a trail for all other workers in this industry, both unionized and non-unionized.

Pay increases, which vary by worker occupation, will reach $2.21 per hour. The collective agreements will cover four or five years, depending on the residence. A majority of the members who attended the union meetings voted in favour of the tentative agreements.

“Our members have fought the good fight and won some encouraging increases, but there are still unfair discrepancies between the private and public sectors,” noted Teamsters Local Union 106 president Jean Chartrand. “Now it’s up to the provincial government to address the situation and close the gap by setting minimum standards for the men and women who work in this industry.”

The Couillard government, which wanted to eliminate joint labour-management committees in a number of industries this past spring, now needs to set up a new joint committee to set standard conditions for all the dedicated workers who take care of seniors. Otherwise the care provided to seniors living in private-sector residences could deteriorate rapidly.

“The potential class-action suit against the Quebec government, citing elder abuse in longterm health care facilities, sounds an alarm that should be a wake up call for civil servants and elected representatives,” added Chartrand. “A society as prosperous as ours cannot squeeze savings out of elder care and workers. Right after the election this fall, the government will have to take decisive action.”

Most of the previous collective agreements in these residences expired in 2017. Resolving the conflict required several meetings with the employer and with a conciliator.

The Teamsters Union represents the interests of nearly 40,000 men and women workers in Quebec, more than 1,000 of whom work in seniors’ residences and long-term health-care facilities. Teamsters Quebec is affiliated with the International Brotherhood of Teamsters, which has 1.4 million members across North America.