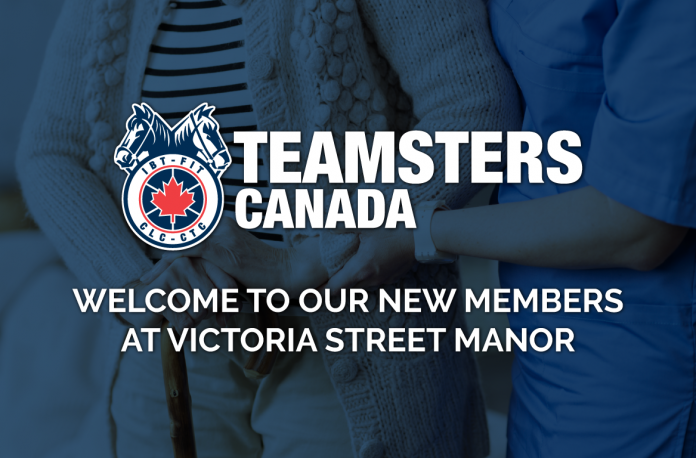 Working in senior care facilities can be challenging. Homes are often understaffed, making the job stressful and making it difficult to give residents the care they deserve. Sometimes, workers are also victims of violence or harassment from the very people they’re trying to help.

People who care for the elderly are working-class heroes. They deserve support in the workplace, fair wages, and all the respect in the world. That’s why workers at the Victoria Street Manor in Amherstburg, ON filed to join Teamsters Local Union 879 last Thursday.

The new members, which include duty nurses, direct support and maintenance workers, wanted to rally together to make positive changes in their workplace.

Their hours were regularly cut for no reason, paychecks were often late or incorrect, and many workers hadn’t seen a raise in years until the Ontario minimum wage increased in 2018. That’s no way to treat people caring for our elderly parents and grandparents.

The staff holds a deep respect and admiration for the residents under their care. It’s time their employer showed some appreciation – especially since improving working conditions in retirement homes usually leads to improved conditions for residents.

The staff will now have to work to get a first collective agreement. They’ll have to show the same solidarity they did when they voted to join the Teamsters.

Teamsters represent retirement home workers at both private and public-sector facilities across the country. Interested in joining the Teamsters? Click here to get in touch with an organizer. All information will be handled confidentially.