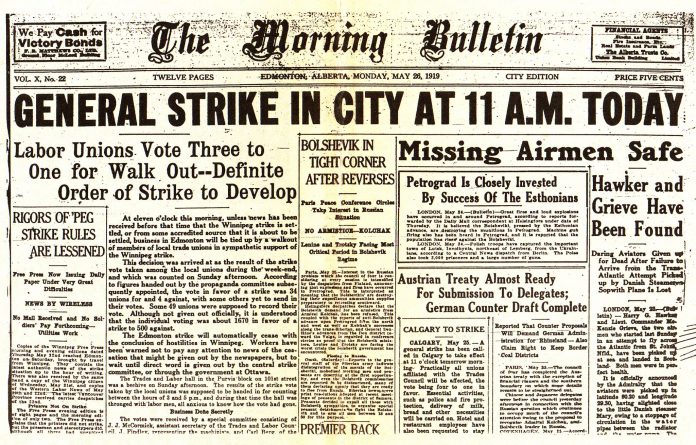 Teamsters Canada President François Laporte is in Winnipeg tonight to celebrate the 100th anniversary of the Winnipeg General Strike. He is accompanied by a large delegation of Teamster representatives, including International Vice-Presidents Craig McInnes and Stan Hennessy.

The following is an article on what the 1919 Winnipeg General Strike teaches every working person by Hassan Yussuff, as published in the Winnipeg Free Press and in the Toronto Star. Important reading on an important day…

What the 1919 Winnipeg General Strike teaches every working person

The year 1919 was fraught with discontent.

Workers in Canada were struggling to make ends meet and inflation had risen by 65% over a six-year span.

Men who had just returned from a horrific war in Europe could not find employment; factories were shutting down and bankruptcies were a common occurrence. Tens of thousands of people in Winnipeg alone lived in substandard housing where disease was a deadly reality. Working-class immigrants faced deep divisions along ethnic, linguistic, and religious lines.

This was the backdrop to what would become the most significant workers’ movement this nation has ever seen – one that holds lessons for us today. Key amongst them: organized and united workers are much better positioned to negotiate better working conditions than those who aren’t.

On May 15, 1919, over 35,000 Winnipeg public and private workers united to send a clear message to employers and to governments: they would strike in order to win better wages and the right to collective bargaining.

Workers overcame cultural and gender divisions to organize and effectively shut down the entire city of Winnipeg for six weeks while maintaining key services. Women were at the forefront – among the first workers to walk off the job.

While the strike was eventually broken and many of its leaders were imprisoned or deported, it left a legacy of labour law reforms that redefined fair and safe work across the country.

We have a far stronger social safety net than those workers could have ever dreamed of. We have universal health care, minimum wages, old age pensions, and employment insurance. We have maternity leave, weekends, health and safety standards, due in part to their sacrifices.

Nowadays, we take many of these things for granted, but we can’t afford to become complacent. Just as the various industrial revolutions transformed society, we are currently experiencing what some have described as the Fourth Industrial Revolution. This means the world of work is shifting and that brings both opportunities and challenges.

Over half of Canadian employees are worried about not having the training and skills they need to get a good paying job in our evolving labour market.

And with fewer workers belonging to a union, it becomes harder to stand up to the power of big business and government in the interests of workers.

“We know that employers are making greater use of employment agencies and short-term contractors to replace salaried employees,” remarked Carolyn A. Wilkins, Senior Deputy Governor at the Toronto Region Board of Trade in a speech this past January. “Unionization rates in the private sector are down. And we hear from labour market experts that this has changed the social contract between companies and their workers.”

In blunt terms, as corporate profits soar in the billions, wages continue to stagnate for the majority. (CEOs now earn more in one day than the average worker’s annual salary) Statistics Canada estimates that over the past four decades, wages for people between the ages of 18 and 35 have literally risen by about a $100 a year – nowhere comparable to the rise in the cost of living. Compounded with the astronomical costs of housing, the opportunities to own one’s own home for today’s young workers– historically a marker of economic health – have shrunk considerably.

When workers are isolated and unorganized, it is far too easy for companies to squeeze their workforce for the maximum amount of profits. Corporate profits soar while the salaries of the people adding value to the company languish.

Corporate tax cuts also benefit shareholders, while diminishing the ability of government to support a functioning society built on reducing inequality. Canadians are taxed on personal income at a significantly higher rate and contribute far more to government coffers than corporations. This wasn’t always the case. In the early 1950s, corporations and households contributed the same share of income tax. Nowadays, corporations contribute around 15%; the rest of us contribute close to 50%.

With a changing economic landscape that continues to threaten certain industries and create whole new ones, the key lesson from the 1919 Winnipeg General Strike must be for workers to overcome fear and division to unionize and safeguard their rights.

Canada’s unions are proud of the contributions they have made to raise the bar for everyone. We are committed to advocating on behalf of all working families – for universal pharmacare, pay equity, better pensions, safer workplaces, and much more.

But if history has taught us anything, it’s that we need every worker to stand up and be counted.