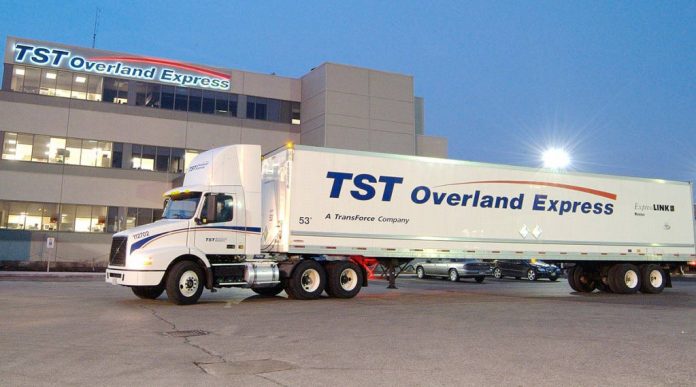 Toronto, June 24, 2019 – Approximately 400 truck drivers and dock workers employed by TST Overland in Ontario voted 83% this weekend to ratify a new 4-year collective agreement. This comes after they had voted by over 99% in favour of strike action last month. Roughly 30 mechanics at the company also voted unanimously to ratify their own separate 4-year agreement yesterday. The workers are represented by Teamsters Local Unions 91, 938 and 879.

“Workers in the trucking industry have demanding, thankless jobs. They deserve fair pay and decent treatment, things these new contracts guarantee,” said the president of Teamsters Canada, François Laporte. “I would like to congratulate the bargaining committee for their hard work and dedication over these negotiations. Job well done.”

The truck drivers, dock workers and mechanics will receive a 9.5% raise over the course of both agreements. They will also see improvements to their pension fund and benefits plan.

Dock workers, mechanics and city drivers at TST Overland are paid an hourly wage. Highway truck drivers are paid a combination of hourly wages and a mileage rate. In their case, the hourly wage kicks in once a route takes longer than normally expected.

Hourly wages are important in the trucking industry; they guarantee fair pay for drivers who need to wait in traffic, at the border or at a warehouse. Some non-union truck drivers paid only by mileage earn less than the minimum wage due to low rates and being stuck waiting for long periods of time.

The union made no concessions throughout the course of the negotiations. The company had sought to deny drivers the ability to refuse to work over 45 hours/week. Forced overtime would have greatly diminished drivers’ quality of life, and would have made it more difficult to manage their fatigue.

The company also wanted to be able to hire casual workers who would not have been covered by a collective agreement. These workers would have received smaller paychecks and no benefits, pension or job security.

Finally, the company had sought to crack down on union rights in both collective agreements. The proposed changes would have greatly reduced to the union’s ability to defend employees’ rights.

“This victory would not have been possible had our members not demonstrated incredible solidarity by voting almost unanimously to authorize a strike,” said Rick Davies, business agent at Teamsters Local Union 938 and head of the negotiating committee. “They showed the company in no uncertain terms that they were serious about defending their rights.”

“I would like to thank my colleagues, Brother Doug Pilkey and Brother Brad Reid, for helping me chair these negotiations, and the sixteen stewards on the bargaining committees who played a critical role at the table,” he added.

Teamsters would like to recognize and thank Brian Stevens, a mediator from the Federal Mediation and Conciliation Service (FMCS), for his role in helping reach a negotiated settlement.

The previous collective agreements for the drivers, dock workers and mechanics had expired on March 23, 2019. Negotiations had been ongoing for approximately 4 months.

Teamsters represent 125,000 members in Canada in all industries, including 15,000 long-haul truck drivers. The International Brotherhood of Teamsters, with which Teamsters Canada is affiliated, represents 1.4 million workers in North America.