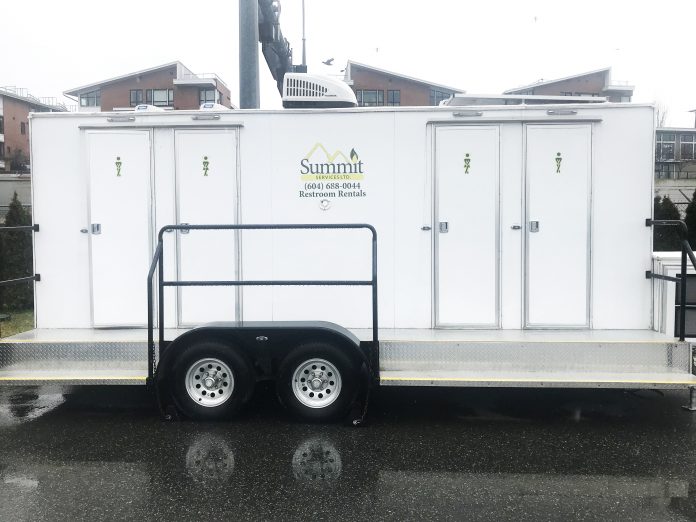 Vancouver, March 27, 2020 – Teamsters Local Unions 31 and 155 have secured safe and clean washroom facilities for members and non-members alike at the ports within the Vancouver Fraser Port Authority.

The move came as stores and truck stops are closing or limiting access to their facilities in the wake of the pandemic, making it harder for truck drivers across North America to find open access to washroom facilities. The issue is hitting port drivers in Vancouver just as badly.

“Truck drivers are front-line workers who are essential to getting medication and other vital necessities to Canadians. If they go down, we all go down. The least we can do is get them access to decent bathrooms,” explained the national president of Teamsters Canada, François Laporte.

The units are top-of-the line, portable-trailer washroom facilities which are normally used on movie sets. The units have flush toilets, running water, soap and sanitizer, and plenty of toilet paper. The port authority has committed to maintaining the facilities, cleaning and sanitizing them at least once a day.

“With movie sets closed and knowing the issue currently facing port drivers, we spared no effort to get the bathroom facilities normally used on movie sets to where they are needed. It’s a question of solidarity,” said Lorrie Ward, the secretary-treasurer of Teamsters Local Union 155, which represents movie and TV workers in British Columbia.

A total of eight units have been installed. Three are located on the south shore, two at the Fraser Surrey Docks, and three at Deltaport.

“Teamsters Local Union 31 is tremendously proud of each driver’s commitment and hard work ensuring crucial goods and materials are reaching the businesses and citizens in British Columbia and other provinces, thus preventing further hardship in the fight against COVID-19,” said Stan Hennessy, president of Teamsters Local Union 31, which represents hundreds of port drivers in Vancouver.

Teamsters represent close to 125,000 workers in Canada in all industries, approximately 25,000 of whom live in British Columbia. The International Brotherhood of Teamsters, with which Teamsters Canada is affiliated, has 1.4 million members in North America.