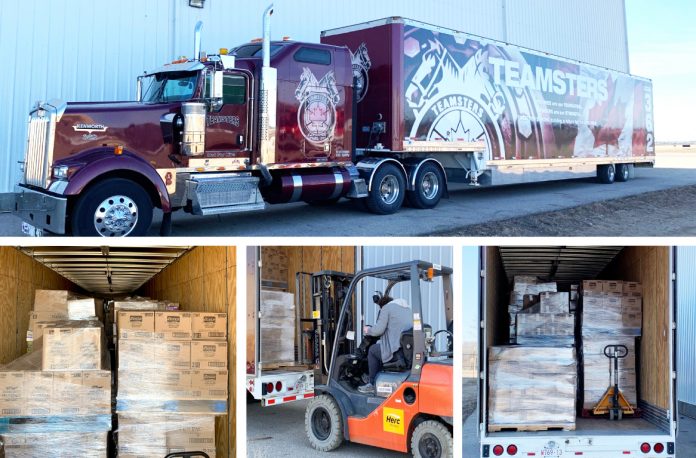 Calgary, April 30, 2020 – Teamsters Local Union 362 in Alberta is using its semi-trailer truck to get food to the Wood Buffalo Food Bank, which lost its building and all the food inside to flooding on Sunday. The union has so far delivered approximately 35 metric tons of food from Food Banks Alberta to a temporary staging area.

“Speed is of the essence in times of crisis. Our local union immediately got in touch Wood Buffalo Food Bank when we heard that they had lost everything. Within five hours of that first call, we had already arranged the first shipment of food,” explained Rick Prouty, the business agent from Teamsters Local Union 362 coordinating the relief effort.

The first truckload of food arrived from Leduc yesterday and the second truckload is en route today Calgary. Stacy Tulp, an organizer from the union local, has been volunteering his time to drive the Teamster truck to make the food deliveries.

On top of using the Teamster truck to deliver food, the union has also reached out to Herc Rentals to provide a forklift and to Grimshaw Trucking to provide pallet jacks for loading and unloading purposes. Both companies agreed to help free of charge.

The union is in the process of reaching out to other trucking companies to increase the number of trucks delivering food for free.

“Being a Teamster is about more than settling grievances and negotiating agreements. It’s also about supporting communities and helping in times of crisis. The good people of Fort McMurray and the Wood Buffalo area can count on us to do everything in our power to help them through this difficult period,” said the national president of Teamsters Canada, François Laporte.

Teamsters represent close to 125,000 workers in Canada in all industries, approximately 13,000 of whom live in Alberta. The International Brotherhood of Teamsters, with which Teamsters Canada is affiliated, has 1.4 million members in North America. 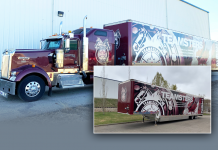