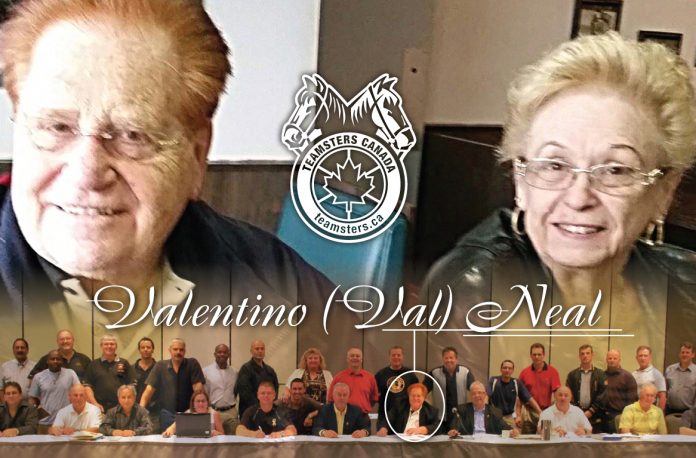 We learned with regret and sadness that Brother Val Neal passed away from COVID-19 a few days ago.

Val Neal has been a prominent figure in the Teamsters Union for nearly 5 decades. He became a permanent union representative of Teamsters Local Union 938 in the mid-1960s and then held the position of secretary-treasurer of the same local union with Charlie Thibault as president. In the mid-90s, he was appointed by the legendary Louis Lacroix to the position of Director of Teamsters Canada’s Small Parcel Division.

Replacing Brother Neil as Director of the Package and Parcel Division was stepping into some pretty big shoes but he laid the ground work for us all.

I met Valentino back in 1991 through Local Union 362 and I knew that I was rubbing shoulders with some of the toughest our union had to offer. Later that year I was involved in the United Parcel Services negotiations and saw Brother Neal at the height of his career and ability. He was a giant in our industry, and a force to be reckoned with.

Through my years as a representative for our UPS members I worked many negotiations as well dealing with issues through our Division with Val. He always tried to get along and make the best out of many different and varying view points we often pulled him in, but you knew when enough was enough and if you didn’t, you were in for a lesson in the Teamsters way.

Our members work under good contracts today as a result of Brother Neal’s skill and dedication and the local representatives learned well from him through the process.

Goodbye big guy  until we meet again and thanks for the memories.

Our most sincere condolences to Kathy and family from Teamsters members everywhere.