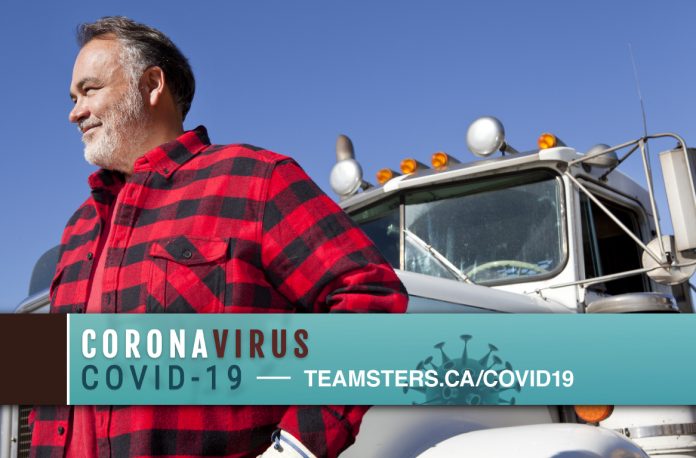 François Laporte is President of the Teamsters Canada Union. The Teamsters represent the interests of tens of thousands of men and women truck drivers in North America.

Right from the start of the coronavirus outbreak, there have been waves of accolades for nurses, personal care workers, cashiers, and workers in other trades – and rightly so. One blind spot in our collective view of the situation, though, has been the necessary but unnoticed contribution, every day, by men and women truck drivers.

Crisscrossing North America from north to south and east to west, truck drivers ensure a steady supply of goods to businesses, grocery stores and hospitals, 24 hours a day, seven days a week. Their work means well-being for all of us.

It’s easy to underestimate truck drivers’ bravery and dedication. If there were no truck drivers, Canadians’ lives would be a lot more complicated. How do you feed a family without fresh fruit and vegetables delivered to the neighbourhood grocery store? How do you care for sick people and help those most vulnerable without medical supplies, brought in by truck drivers?

At the peak of the crisis, the struggles were real for truck drivers everywhere. We’ve all heard about public washrooms that were closed to everyone, including truck drivers spending long hours on the road. And restaurants that stopped offering counter service. And roadside rest areas in all parts of North America that denied truck drivers access to a well-deserved shower after a long day on the road.

These are only a few examples of the problems truck drivers had to deal with every day.

I could also tell you about grocery stores turning away truck drivers for fear that they might be COVID19 carriers because they were returning from the United States.

While little was done to make truck drivers’ work easier, the supply chain had to continue to function, seamlessly. The wheels had to keep on turning, nonstop, with little thought for the repercussions on truck drivers.

Truck drivers kept on trucking, not asking for special treatment, and delivering the goods with a side order of courage.

I think it’s time to acknowledge that the situation would be a lot harder to take without the work of these women and men, who leave home every morning to bring food and medical supplies to all parts of Canada.

It’s time truck drivers were rewarded for their sacrifices. However it is done – tax breaks, wage subsidies, or any other means – it is in the absolute best interests of both federal and provincial governments to thank truck drivers for the work they have done, and will keep on doing.

Truck drivers make a vital contribution to our well-being. Without them, what would our communities look like today?