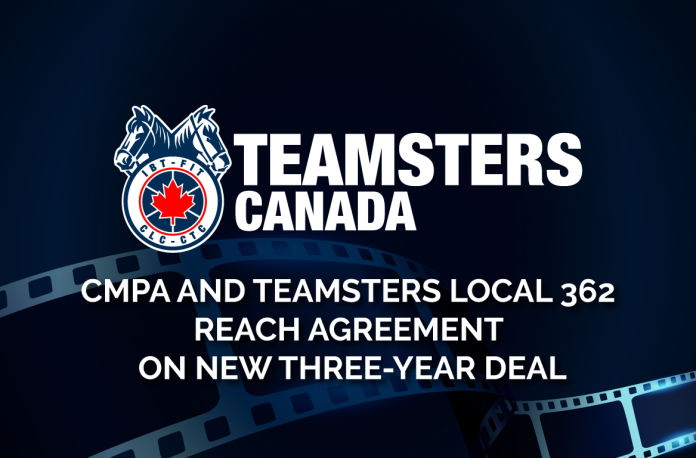 TORONTO / CALGARY, June 23, 2020 – Today, the Canadian Media Producers Association and Teamsters Local 362 jointly announced the successful negotiation of a three-year master agreement. The new deal, which has been ratified by the members of both parties, establishes the terms, conditions and rates for crew including drivers, wranglers and caterers engaged in film, TV and digital media production in Alberta.

“In these unprecedented times, it’s more important than ever for producers and unions to work collaboratively towards a common goal,” said the CMPA’s Warren Ross, General Counsel and Vice-President of National Industrial Relations. “We’re proud to have reached an agreement that recognizes the value each Teamsters member brings to the success of the Alberta production industry.”

Despite the interruption of negotiations due to the onset of the COVID-19 pandemic, negotiations recommenced online and a tentative deal was reached by the June 1 deadline set by the parties. This was the first-ever Canadian independent production industry labour negotiation to be completed virtually, with negotiators participating from locations across Canada. The deal was fully ratified by the CMPA and Teamsters memberships on June 12.

“The COVID-19 pandemic has forced organizations to innovate in a number of ways, and negotiating this agreement virtually was one of those innovations,” said Michael Dunphy, Business Agent for General Teamsters Local Union No. 362. “I couldn’t be prouder of my bargaining committee, and also the rank and file. Their involvement and commitment to the process was unmatched.”

The new master agreement includes a revised budget tier and wage structure for the first year of the agreement. The parties also agreed to a one per cent wage increase in the second year of the deal, and a two per cent increase in the third year. The deal will remain in effect until March 31, 2023.

The Canadian Media Producers Association is the national advocacy organization for independent producers, representing hundreds of companies engaged in the development, production and distribution of English-language content made for television, cinema and digital media channels. We work to promote the continued success of the Canadian production sector and to ensure a bright future for the diverse content made by our members for both domestic and international audiences. cmpa.ca

Teamsters Local 362 is affiliated with the International Brotherhood of Teamsters. We have over 100 Collective Bargaining Agreements providing security and peace of mind to workers in a vast array of industries. Being a member of Local 362 means you and your family have the ability to build a future as you are part of a team of approximately 7000 members spread across the Province of Alberta and the North West Territories. We are proud to be a key part of communities where our members live, work and organize.