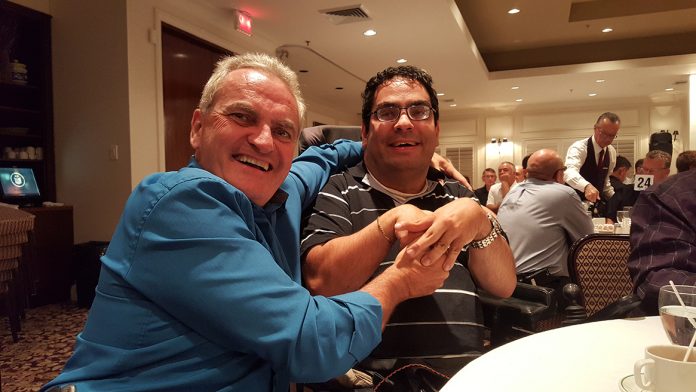 Laval, September 14 2015 – On Thursday, the Teamsters Union sent the profits from the Teamsters Quebec Omnium to the Director General of the Quebec Society for Disabled Children and Camp Papillon, Ronald Davidson.

The Teamsters have raised $1.7 million since they started backing the cause.

“The generosity of the Teamsters Union is legendary, and I’m forever grateful,” said the QSDC’s Director General, Ronald Davidson. “Personally, I think the word ‘solidarity’ is a synonym for ‘Teamsters’ because of just how great they’ve been.”

Dozens of golfers from all walks of life participated in this golf tournament which was held at Le Versant Golf Club in Terrebonne, Quebec.

“Besides Camp Papillon, the Teamsters are involved in several other similar causes throughout the country,” explained the President of Teamsters Canada, Francois Laporte. “Each year, our local unions raise hundreds of thousands of dollars for chartites because we believe a just society must be built generosity and empathy.”

The President of Teamsters Canada wanted to pay a special tribute to two pillars of Local Union 1999.

“Lise Surprenant and Alain Lacroix, an administrative assistant and union representative at the local union, were the organizers behind the Teamsters Quebec Omnium for the past several years,” said Laporte. “They’re leaving this year for a well-deserved retirement and they will miss us.”

The Teamsters Quebec Omnium will now be organized by Éric Laramée, trustee of Teamsters Canada Local Union 1999, as well as Nadia Prud’homme and Maryline Philie.

Local unions affiliated with the Teamsters raise hundreds of thousands of dollars for charities across Canada.