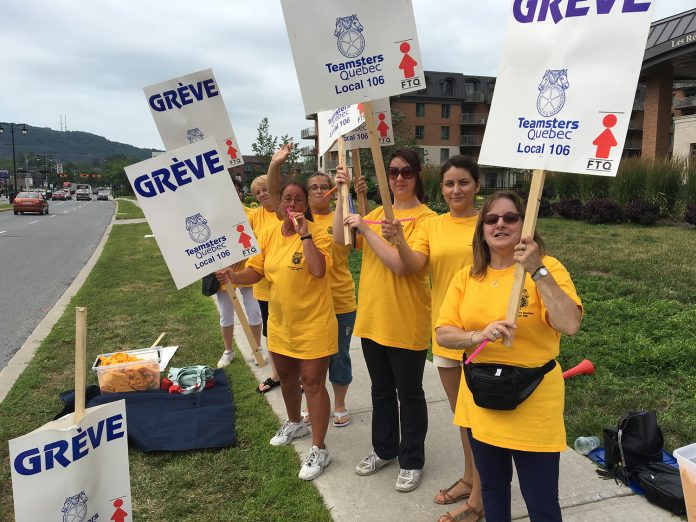 Laval, July 20, 2016 – The 74 workers of the Résidences Soleil Manoir Sainte-Julie are still waiting for a sign from owner Eddy Savoie to resume negotiations.

Nearly a week after the strike was called (July 14), there is still no meeting scheduled between the parties. Negotiations are deadlocked as members of Teamsters Local Union 106 continue to demand an increase of $1.50 per hour and a night-shift premium for a two-year collective agreement.

“Our members feel that Eddy Savoie doesn’t respect them,” said an exasperated, Jean Chartrand, president of Teamsters Local Union 106. “They provide high quality service to the facility’s 551 residents and deserve the best.”

Still, the labour dispute has had some positive consequences. Several residents and their children have come by to greet and support the workers on the picket lines. They asked for buttons reading “We respect our seniors and those who care for them,” so they could wear them with pride. Even motorists along busy Chemin du Fer-à-Cheval in Sainte-Julie have been encouraging, stopping to chat with workers and honking in support.

A petition was also circulated at Manoir Sainte-Julie and submitted recently to the employer. Many residents are unhappy with the quality of meals offered in the Résidences Soleil network of retirement homes. Some residents even go to neighbourhood restaurants rather than eat the food offered on-site.

“The wave of sympathy and support from residents, their children and the public warms our heart,” added the union leader. “It would be a mistake for him (Eddy Savoie) to turn a deaf ear to our calls for negotiation. Stubbornly ignoring us is only tarnishing his image with his clients.”

The strike will continue until the workers get satisfaction. Personal care attendants in the public sector earn up to $6 more per hour than private sector workers. This situation is both unfair and deeply insulting to workers represented by the Teamsters.

“I don’t know if this will be a long strike,” said Jean Chartrand. “But I do know that our members are determined to get the respect they deserve.”

The Teamsters have decided to use pressure tactics only during their breaks and holidays, so as not to affect the quality of services offered to seniors. This is a first in Quebec.