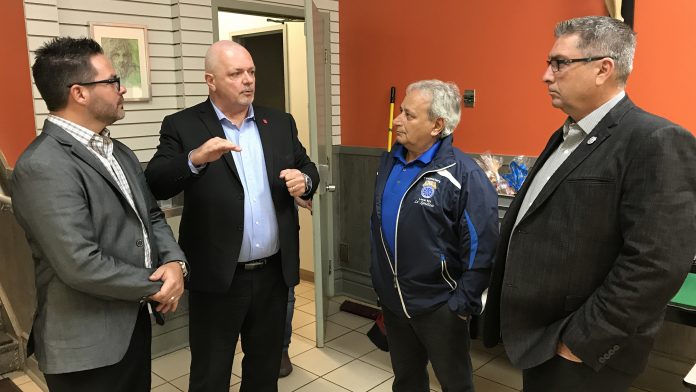 A visit to Accueil Bonneau, an organization that helps the homeless

I was waiting for three Teamsters brothers on De La Commune Street in Old Montréal and watching the comings and goings around me: angry drivers stuck in a small traffic jam, w going about their day-to-day business, and a freight train chugging along slowly on the other side of the street, by the Old Port. The sky was grey and the clouds were low. Even though it was May, it felt more like fall.

I had this strange sense of being in a bubble where time was going by more slowly.

Passersby could easily miss the small sign on the building I was standing in front of, the Accueil Bonneau building. Accueil Bonneau is an iconic organization that has been helping the homeless – most of them men – for nearly 140 years now. Looking around, I could see no homeless people, no line-up for breakfast. There is no indication that the grey stone building welcomes more than 600 people every day… 600 people who are homeless or at risk of becoming homeless, and who come here for their first– and in some cases their only – meal of the day.

This year, for Quebec’s Homelessness Awareness Week (Semaine de l’itinérance), Teamster representatives decided to make a donation to Accueil Bonneau. The General Manager of the Fondation Accueil Bonneau, François Rondeau, welcomed us and gave us a tour of the building.

We walked into a large room where every seat was taken. Men were sitting in front of their meals, not moving, waiting for the nun to finish the morning prayer. Even though Accueil Bonneau is no longer a religious organization, it has maintained its tradition of praying before the morning meal.

Today, they’ll be having meatball stew with potatoes and vegetables. And for dessert: a big, beautiful brioche. After the prayer, the men all dig into their meals at the same time and eat with gusto.

We continued our tour and chatted with a few volunteers and “clients.” I saw in their eyes something distinctive, yet hard to define. Life has taken its toll on them. Some have lived through a multitude of trials and tribulations. But they all have one thing in common: gratitude. Some of them feel lucky to be helped and others feel lucky to be able to help.

One of them told us that he feels less “nervous” thanks to the Accueil. He thanked Mr. Rondeau for the good meal and for the work of the employees and volunteers.

A Variety of Services

Besides breakfast – or a snack later on in the day –, the homeless also have access to a variety of services: help with making a budget, art workshops, computer literacy, podiatry and chiropractic care, toilets, showers, changing room, etc. In a nutshell, Accueil Bonneau provides almost all of the services these men need.

Some come here to find a suit so they can attend a son’s graduation or a daughter’s wedding. Others will come for a shower and shave. The needs are great, but Accueil Bonneau’s resources are vast.

General Manager François Rondeau, explained the mission and the origins of the organization, and shared some moving stories with us, such as the one about two volunteers who found their father here, a father they thought they had lost for good.

Mr. Rondeau also told us that more and more low-income workers are coming to the Accueil for breakfast or to get clothes. This comforted me in our support for the $15 per hour minimum wage campaign that FTQ-affiliated unions, including the Teamsters, have been leading for months now.

“Over the past few years, we’ve noticed an increase in the number of workers that come here,” he said sadly. “People have jobs, but they’re having a hard time making ends meet. We’re no longer just dealing with the homeless now.”

Just imagine: Accueil Bonneau, which we thought was only helping the disenfranchised, is now helping workers!

When we asked him about some of the problems the homeless have to deal with, Mr. Rondeau mentioned weather, of course, but he also added the following disturbing comment:

“The homeless don’t mind if people don’t give them money when they run into them on the street,” he explained. “What hurts them is when people look away from them, as if they didn’t even exist.”

It’s as if people don’t even want to see them.

Over the past few decades, deinstitutionalization and governments’ withdrawal from helping the less fortunate has put thousands of men and women out on the streets. Add to this the indifference of a portion of the population and you can see how day-to-day life can be difficult for them.

The homeless who visit the Accueil struggle with a variety of problems ranging from drug abuse, alcoholism and mental health problems, to reversals of fortune, loss of work and rejection by their family. Some hit rock bottom. Many get back up on their feet thanks to the help of the hundreds of volunteers and employees at Accueil Bonneau.

Because the Teamsters Union protects workers from arbitrary employer decisions and employer greed, and because it is fighting to raise the minimum wage to $15 per hour and also leading a campaign to make mental health a priority in the workplace, it’s only natural that we would want to help people who are down on their luck.

After the tour, I took the time to reflect on one of François Rondeau’s comments: “We are two steps away from being on the streets.”

No one is immune to misfortune. The more resilient among us will make it through. For those who don’t, Accueil Bonneau and a handful of similar organizations are there to help.

I will never look at homeless people the same way. These men and I have far more in common than I thought before I met them and spoke with them. Who is to say if I won’t be dealing with the same hardships one day? All it takes is a single misfortune, a simple twist of fate…

The goal of Accueil Bonneau is to help homeless people or people at risk of becoming homeless reintegrate into society and secure a stable residence. We meet their basic needs for food and shelter and support their efforts to improve their quality of life and well-being. But we need your help! If you would like to make a financial contribution, become a volunteer or donate perishable or nonperishable goods and clothing, please contact them at: https://www.accueilbonneau.com/english/