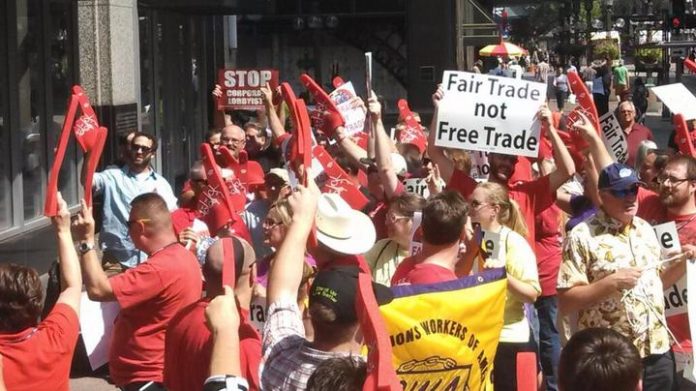 NAFTA talks start in Washington, D.C. today on an ambitious schedule to come up with a “modernized” agreement by the end of the year. The Teamsters Union will be tracking them closely. As North America’s transportation union, our members on the roads and rails, in warehouses and ports from coast to coast, depend on trade for their livelihoods. The livelihoods of Teamster members in bakeries, breweries and the dairy industry also depend on a stable trade relationship. Teamsters are pro-trade – but we want fair trade.

First, we remind negotiators from both countries of the importance of Canada-U.S. trade. Contrary to what some may believe, there is no significant trade imbalance between our two nations. In fact, we are each other’s biggest customers – 64 percent of all Canadian trade is with the U.S., and 48 U.S. states count Canada as one of their largest export markets. Last year, the United States exported more to Canada than any other country. It’s why we believe NAFTA renegotiations must not inadvertently disrupt our trade relationship – a belief shared by our governments and most business stakeholders.

That said, we also remind the new NAFTA negotiators why Teamsters opposed the original agreement a generation ago and why we have opposed its expansion in numerous trade deals since – most recently in the Trans-Pacific Partnership (TPP). Simply put, the NAFTA model does not work for workers. Instead, it subordinates their interests to the bottom-line profit motives of multinational corporations, suppresses wages and labour standards, and contributes to rising inequality. We welcome NAFTA renegotiation and, on behalf of our 1.4 million members, we will engage with our governments to upgrade this flawed and failed “free trade” model.

This starts with the inclusion of a new Labour Chapter to replace the original ineffective side agreement. New and enforceable provisions that protect workers’ right to organize will be central to the success of and a precondition to our support for NAFTA modernization. The elements of an effective Labour Chapter are straightforward:

•  Substantive worker protections that are grounded in the core conventions of the International Labour Organization (ILO) forbidding child and forced labour and protecting the freedom of association and collective bargaining;

•  Sanctions for violations of those substantive protections that are at least as rigorous as those that protect commercial interests, and include denial of benefits under the agreement;

•  A new and independent labour secretariat to investigate violations and help raise labour standards throughout North America; and

•  The fundamental stipulation that the wages and working conditions of all workers always affect international commerce, so that enforcement and remediation are not avoided under the pretext that violations are not trade-related.

As the new NAFTA talks progress over the next several months, state and provincial Teamster leaders will speak out on other, thornier issues that are important to our members.

We will oppose including dairy market access in the new NAFTA, noting that it was kept off the table in the original agreement. We will also make the case that cross-border long-haul trucking commitments should not undermine highway safety or damage the border environment. But for now, at the start of the first round of formal negotiations, we respectfully demand a new approach and new attention to the larger expectations of workers throughout North America.

Finally, real reform towards a pro-worker NAFTA replacement model that we can support is achievable only if the negotiation process is open and inclusive. We urge our governments to share the negotiating texts after each round of talks with Parliament, Congress, the labour movement in all three countries, with civil society stakeholders and the public at large. Standing ready to support the best instincts of the Trump and Trudeau trade teams to make NAFTA work for workers, the Teamsters Union urges that negotiations be democratic and transparent.