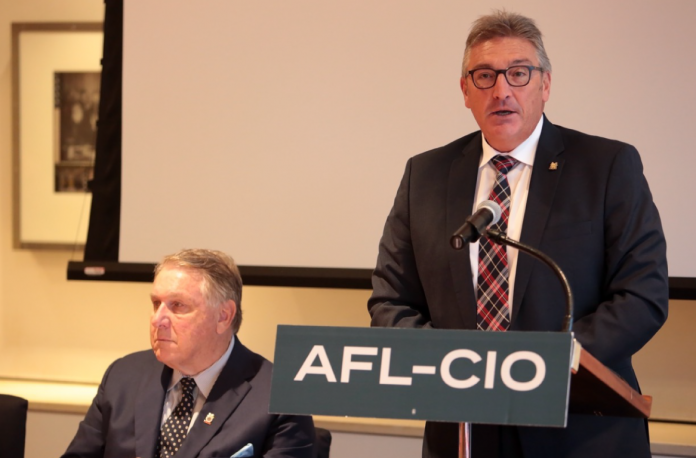 (WASHINGTON) – Top Teamsters leaders joined with members of Congress and their fellow union allies from across North America today in laying out a path forward for a revamped North American Free Trade Agreement (NAFTA) as negotiators meet in the nation’s capital to discuss changes to the trade pact.

Teamsters General President Jim Hoffa and Teamsters Canada President François Laporte, speaking at a North American labour summit sponsored by the AFL-CIO, agreed that workers’ rights must be front-and-center in the minds of those participating in the fourth round of renegotiations of NAFTA. A new deal, they said, must enforce basic labour rights, increase wages and living standards for working families throughout the continent.

In the U.S., Hoffa said that means pushing back on anti-union legislation that hampers workers’ ability to collectively bargain.

“Teamsters in the U.S. are mobilized against the spread of so-called ‘right-to-work’ laws in the states because they depress wages by undercutting union power,” he said. “I applaud the Canadians for making this a trade issue. We agree that these laws incentivize employers to relocate from Canadian provinces that don’t allow ‘free-riders’. I urge the Canadian negotiators to hold their ground on their progressive labour text and for the U.S. negotiators to take this issue seriously. ”

Laporte added, “Canadian Teamsters, like our brothers and sisters stateside, recognize that a new NAFTA must contain an ambitious new chapter that will protect worker rights and also be a model for future trade pacts. We appreciate the text tabled by our government, but we want to emphasize that worker rights and protections for indigenous people and women in the workforce are all very important, but that the enforcement is essential. New rights in a new NAFTA won’t be worth much without trade sanctions to back them up.”

A labour chapter as part of NAFTA 2.0 is essential to the fight. That’s why the Teamsters are participating in talks with the Steelworkers, the AFL-CIO and fellow unions from Canada and Mexico to ensure a successful NAFTA renegotiation.