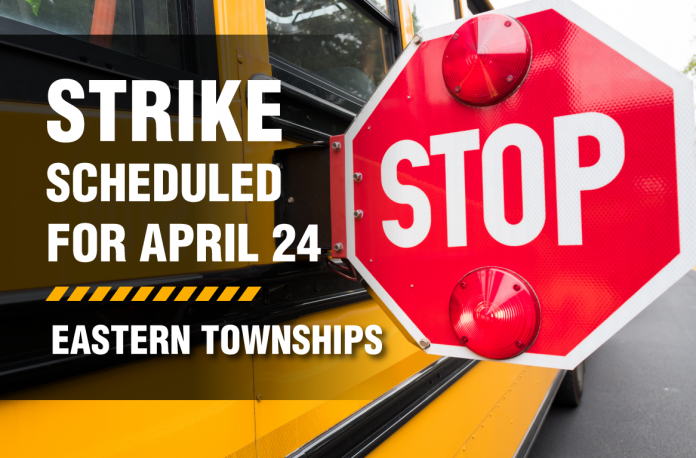 Wages are the main sticking point. The pay increases management is proposing will not allow our members to keep up with the cost of living…

Laval, QC, April 12, 2019 – Barring significant progress at the bargaining able, school bus drivers at Autobus DL will walk off the job on Wednesday, April 24 at 7 a.m. Between 3000 and 3500 students at the Eastern Townships School Board and the Commission scolaire du Val-des-Cerfs may find themselves without school bus service. Wages are the main sticking point.

“The pay increases management is proposing will not allow our members to keep up with the cost of living. School drivers are already the lowest-paid professional drivers in Québec, earning on average $20,000 a year,” explained the president of Teamsters Local Union 106, Jean Chartrand.

On Wednesday, it was announced that members had voted by a margin of 91% to walk off the job at a moment deemed appropriate by the union. But the latest talks with the company indicate that there is no way forward for the time being.

The collective agreement expired last summer. The union remains open to continue negotiating, but management is not ready to make any new offers and no new meetings between parties have been scheduled at this time.

“Out of solidarity with parents, the union had committed to providing advance notice of any work stoppage. We sincerely hope this 12-day notice will give them enough time to find other options for taking their kids to school,” added Jean Chartrand. “Meanwhile, we will continue doing everything possible to avoid a strike and reach a fair and equitable agreement for our members.”

Working conditions in this industry are difficult. On top of low wages, school bus drivers have to deal with split shifts, bad weather, poor roads, students’ behaviour and impatient or aggressive motorists.

A strike at Autobus DL would mainly affect the cities of Cowansville, Bromont, Adamsville, Waterloo, Knowlton and Farnham.

Teamsters represent close to 125,000 members in Canada in all industries, including over 1000 school bus drivers in Québec alone. The International Brotherhood of Teamsters, with which Teamsters Canada is affiliated, has 1.4 million members in North America.