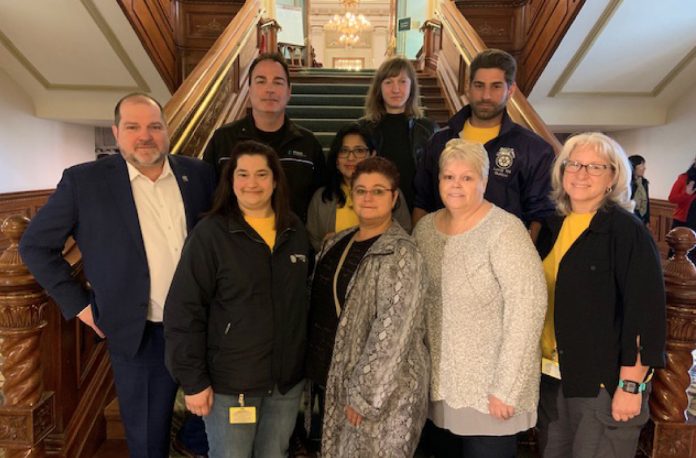 Québec City, May 14, 2019 — A provincial decree to impose common working conditions in residential and long-term care centres (CHSLDs) and private retirement homes has become inescapable. That is the conclusion reached by the Teamsters Union, which has the support of Québec solidaire and Parti québécois opposition critics Catherine Dorion and Harold Lebel.

A decree would ensure that public and private sector workers have similar conditions and guarantee healthy competition between companies that own retirement homes. Moreover, such a measure would help with the sector’s labour shortage because it would improve wages for care workers in Québec.

“We’re happy that opposition parties are supporting this initiative,” said the president of Teamsters Local Union 106, Jean Chartrand. “During the last few years of my dad’s life, I had the opportunity to witness the dedication of retirement home workers. I can guarantee you that they deserve more and better, and that improving their lives would also improve the lives of the people they care for.”

While they do exactly the same type of work, private sector care workers are paid up to $5/hour less than their public sector colleagues. That makes the private sector less attractive and fosters a labour shortage.

The shortage means that there are less people to feed, clean and care for seniors. Because there aren’t enough workers to meet the province’s growing needs, seniors will not benefit from all the services they should be receiving.

“Difficult working conditions for care workers reflect the absurdity of a world in which we dare not ask companies and the super-rich to do their fair share, but keep pushing care workers to do more and more with less and less. We’re sickening the people we pay to care for us. It’s institutional violence, and it’s time to push back,” said the MNA for Taschereau and Québec solidaire opposition critic for seniors, Catherine Dorion.

“In the current context, given the aging population, care workers are becoming vital actors for the well-being of our seniors,” added Harold Lebel, the Parti québécois MNA for Rimouski. “We need to adapt working conditions for the people who are giving their all for the profession, especially at a time when the need for care workers is expected to rise. The well being of our society, the quality of life of our seniors and the efficiency of our health care system are all at stake. It’s not just care workers who will reap the benefits, but the whole of society.”

Making the rounds at the National Assembly

Over the last few months, the Teamsters have been meeting with provincial politicians to raise awareness about these issues. Chantal Cardinal, Denis Ouellette and Yanick Chartrand, all three business agents with Local Union 106, took part in meetings with elected officials, which is what brings them to the National Assembly today. They will be accompanied by union members who work in private retirement homes.

Because MNAs Catherine Dorion and Harold Lebel have accepted to support the Teamsters Union’s proposals, a press conference was held this morning at the National Assembly. The goal was to send a clear message to the province’s Minister for Seniors and Informal Caregivers: the time for parliamentary commissions, public consultations, studies and surprise visits to care centres is over.

The government must act now.

Teamsters represent over 1000 workers in CHSLDs and private retirement homes in Québec. Teamsters Canada and its 125,000 members are affiliated with the International Brotherhood of Teamsters, which represents 1.4 million members in North America.